Egypt houses and citadels featured by many sites to visit in Egypt. Built in the 1480s, the small citadel of Qaitbay overlooks Alexandria’s Eastern Harbor and contains ruins from the all famous Pharos or Lighthouse of Alexandria , a former wonder of the world. Legend has it that the prominent landmark stood an incredible 135 meters high. Imagine that donkeys had to go up and down the double spiral staircase carrying day and night loads of timber to fuel the lighthouse’s lantern! Experience the palatial life of 14th century Mamluk princes in one of the only remaining domestic residences from the period. Beshtak Palace, located on Al Mu’izz li-Din Allah Street, was built by Prince (Amir) Beshtak Al-Nasiri.

In fact, it was between 1334 and 1339 where the Eastern Fatimid palace used to stand. You will find two stories of this palace down a small alleyway and through an arch in old Islamic Cairo. While it’s a historic building, Beyt Al-Harrawi is also all about music. So much so that it also goes by the moniker Beyt Al-Oud (house of the lute). In fact, the director of the house is one of the Arab world’s foremost Oud players, Naseer Shamma, known for his innovations when it comes to the instrument. The space has been dedicated to music and visitors can enjoy concerts in its open-air courtyard. Sitting in the courtyard, you will also be able to admire the hand-carved mashrabiya windows, which are designed for privacy, especially of the women of the house.

Coming off the courtyard is the lavish mandarah, or sitting room, with its carved wooden ceilings and a mosaic inlaid octagonal fountain. The middle section of the mandarah is slightly raised allowing the master of the house to sit in an elevated position of honour above his guests. Gazing at the typically plain and maybe – to some – even dull façade of Beyt El-Suhaimi, you cannot imagine the architectural treasures you will witness inside. This mansion is Islamic Cairo’s finest example of the traditional family residences built throughout the city from Mamluk times to the 19th century. Once you enter the house, you will emerge into a beautiful inner courtyard transporting you to the days where guests were received in the adjacent impressive reception room, the “qa’a.”

When in Cairo, it is basically impossible to miss the Salah El-Din Citadel, one of the world’s greatest monuments to medieval warfare. Resembling a typical early medieval fortress, with large imposing gateways, towers and high defending walls, the Citadel is one of Cairo’s main attractions and probably the most popular non-pharaonic monument in the Egyptian capital. The prominent fortress houses three mosques – of which the impressive Mohammad Ali Mosque – a carriage museum, a military museum, and a garden museum, just to name a few, and they are all worth a visit. You are even allowed the run of the fortifications and it is worth a try: the views are spectacular from this height.

Further details about the subject:

Beyt Zeinab Al-Khatoun (Zeinab Al-Khatoun’s house) was built in 1468 and is located in Al-Azhar. It is a breathtaking example of Islamic Cairo. The walls and ceilings of the rooms on the first floor are covered in Islamic motifs. On the second floor, you will find two beautiful windows in Islamic architecture, decorated with Islamic plant designs. It’s easy to feel transported to another century as you play backgammon in the Beyt’s picturesque cafe while sipping delicious coffee, black tea, sahib or anise served in tiny glasses out of a blue metal pot spiced with mint, sage or cloves. A trip to the Dakhla Oasis is not complete without a visit to the medieval Ottoman town of Al-Qasr. Al-Qasr is set at the foot of pink limestone cliffs on the northern rim of the oasis.

The architecture of the houses, which engulf the cool narrow streets and alleyways despite the summer heat and protect residents during sandstorms, attests to the importance the Ottomans placed in securing the remote oasis town. Built over an Ancient Egyptian site, Balat is an enchanting Islamic medieval village about 35 km from Mut. See the Sudanese-style mud architecture and the influence of the Mamluk and Ottoman reign of Egypt. Ask a guide to take you to the roof of a mud-brick house to see a fine view of Balat. 200 m east of Balat lies Ain el-Asil, an Old Kingdom Settlement. About 1.5 km away is Qila Al-Dabba, Balat’s ancient necropolis formed of five mastabas, one which has been restored and open to the public.

Spare a few hours on your summer holiday in Nuweiba to visit the nearby fortress built by the Mamluk Sultan, Ashraf Al-Ghouri, in the 16th century. It is only one kilometer away from Tarabeen, the northern coastal area of Nuweiba . Sultan Al-Ghouri built the citadel to protect the Sinai region from a possible Turkish invasion and to look after the travellers and pilgrims passing through this port city. Although the fortress didn’t achieve its first mission – the Turkish invasion took place a while after the fortress was built – its construction helped the local Bedouins by giving them a direct access to potable water through the fortress’ well. The fortress has been undergoing a renovation process for the past few years but it’s open to visitors. The center of Siwa Oasis is dominated by the ruins of the 13th century Shali Fortress.

Built from a material known as “kershef” (salt rocks from the local salt lakes and mud), the ruins are subject to additional disintegration after each rainfall. You can walk up to the top of the fortress to witness spectacular views of the oasis and its surroundings. After a short ferry ride from Taba’s coast, you’ll reach the Island of the Pharaoh, a small granite atoll surrounded by coral reefs and dominated by the magnificent Salah El-Din Fortress, built by Crusaders in the 12th century and recently restored by the Council of Egyptian Antiquities. Salah El-Din based his soldiers on this strategic island in order to control the trade of products coming from Asia and demand ransoms from pilgrims on their way to Mecca. A truly strategic spot: you’ll be stunned by the fortress’s panoramic view, a landscape merging between the coasts of Saudi Arabia and Jordan. 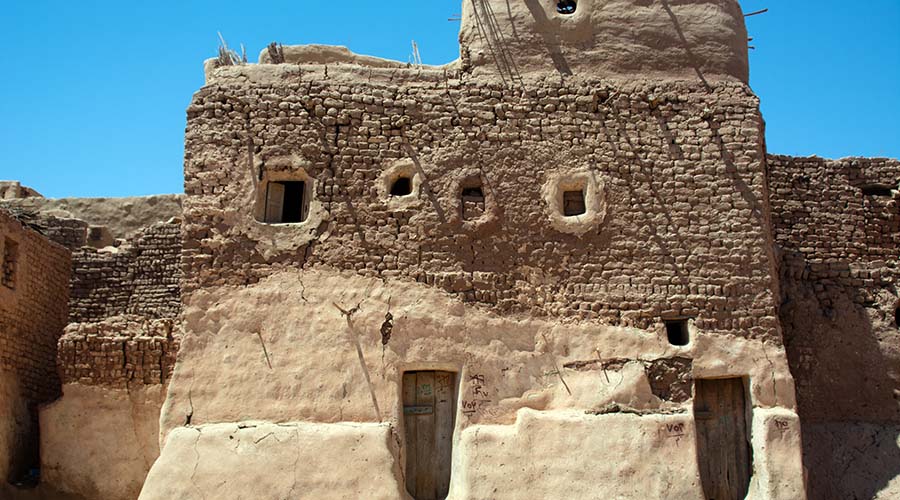