Asyut or Assiut located about 385 kilometer south of the capital city, Cairo, Egypt. In fact, Asyut city is the largest town of Upper Egypt. Moreover, the city houses the third largest university in Egypt. The ancient city of Asyut name was Syut and situated nearby. Asyut is one of the centers of Coptic Christianity and also has an Islamic university. The excellent Islamic university associated with the Al Azhar University in Cairo. the town situated on the left bank of the Nile, with a small older quarter and extensive modern districts. In fact, the town has few features of tourist interest. The town noted for its craft products pottery, marquetry work and ivory carvings. Moreover, it also noted for leather articles, woven fabrics and colored woolen blankets.

Furthermore, the town also noted for tulle shawls with gold and silver embroidery. Here as elsewhere, locally made articles of considerable artistic quality. In fact, the articles driven out by industrial products in European style. Asyut has a busy river port handling soda, cotton and grain. The town is a market center for the agricultural produce of the fertile surrounding area. the town was a place of considerable importance in antiquity. In fact, it was thanks to its situation in a large and fertile plain. The plain extends between the Libyan and the Arabian mountains a distance of some 20 km. Moreover, the plain located at the end of the "road of the forty days". In fact, this road is an important caravan route which led to the oases in the Libyan Desert. Moreover, the road led on to the Darfur Oasis in what is now Sudan.

In fact, Asyut played a considerable part in the conflicts between Thebes and Heracleopolis. Moreover, the town was the capital of the 13th Nome of Upper Egypt, the Sycamore Nome. Moreover, it was the principal center of the cult of the war god Wepwawet. In fact, the god represented as a desert wolf. Hence the town's Greek name of Lycopolis was"city of the wolf". Asyut was the birthplace of Plotinus, the greatest of the Neo Platonic philosophers. In fact, his system influenced to some degree by the doctrines of his native town. It was (205-270 AC). At the beginning of the fourth century, Christianity became dominant in the town. Moreover, pious believers moved into the caves of the necropolis to live a life of penitence. Among them was John of Lycopolis who gained the reputation of a saint and a prophet.

The Emperor Theodosius sent to John an envoy. In fact, it was to ask about the outcome of his conflict with his rival, Eugenius. John foretold the Emperor's victory. During the medieval period, the town enjoyed considerable prosperity. In fact, it was thanks to its extensive trading connections. Moreover, it was also thanks to its slave market which indeed was the largest in Egypt. Soon after the murder of President Sadat, there were bloody conflicts in the town. In fact, it was between Muslim radicals and the police in October 1981.

The distance between Cairo and Asyut by road or rail. A desert road connects the two cities and has no gas stations or cafeterias. In fact, there is nothing around but just a desert for the five-hour driving. You should carry enough water and food for the way. The agricultural road also connects the two cites. In fact, the road runs through several towns which adds time to the journey. In fact, a rail journey would take more time. Yet, it would be safer as the desert road is almost lonely all the way. In fact, the town doesn't feature luxurious hotels and tourists have a few interesting options. The city center offers decent accommodations with hospitable staff and owners.

If you want a more comfortable stay, you can choose one of the large boats on the Nile. In fact, the boats feature a perfect view of the sunset, clean and maintained rooms. Moreover, the boats also feature more than one dining option. There are many ancient structures minutes away from the main city center. The convent of Virgin Mary is 10 km from the city and lies along the steep walls of Western Mountain. In fact, the convent adjoins a cave which was the last temporary home of the holy family. It was before they returned to Palestine. In fact, the cave features beautiful artwork and the friendly nuns. They make this ancient place a good visit for the pilgrims and tourists alike.

August attracts millions of tourists from all over the globe for the fast of the Virgin Mary. The Virgin Mary appeared in Asyut on 17 August 2000. This apparition recognized as an official Marian apparition. In fact, it recognized by the Coptic Orthodox Church. Moreover, it well remembered in the Al Muharraq monastery and the monastery of Dronka. The city of Asyut sandwiched between two mountain ranges of about 600 m height. There is also a lowering in elevation in mid Egypt, from the Mediterranean and the Red Sea. In fact, this gives the city and nearby towns the typical properties of a continental climate. So, the city has harsh and chilly cold winter weather, and hot but non-humid summers.

During summer the temperature can exceed 42C. Yet, in winter Asyut gets sub-zero temperatures during the night. In fact, frost can form, while hail or snow are rare. It is because of the low average of the city's precipitation and general lack of humidity. In fact, Asyut houses Banana Island to the north. The island is a 19th century English barrage and still irrigated by a canal. The Hatnub quarries have a long history and were a half's day journey from the Nile in ancient times. Al Muharraq monastery located just 45 minutes drive from the city of Asyut. In fact, the monastery features a souvenir shop, churches and a library. Moreover, the monastery also features an old mansion. In fact, the old mansion transforms the scenery into a completely magnificent era.

Museum: The town has an interesting little Museum which contains a collection of antiquities. In fact, the antiquities assembled between 1910 and 1914. It was by a wealthy Asyut citizen, Sayyid Pasha Khashaba. He collected them from excavations in the ancient necropolises of Assiut and Meir. The collection includes wooden sarcophagi, including some with fine colored door ornaments. Moreover, the collection also includes a mummy sarcophagus of granite. Furthermore, the collection also includes large quantities of grave goods. In fact, they are in particular domestic and agricultural equipment.

Arab Cemetery: To the north of the ancient necropolis a larger Arab cemetery. In fact, the cemetery extends far into the plain with hundreds of domed tombs which set amid palms.

Further details about what you don't have to miss:

Old Town: To the east of the railroad station is a shady promenade on the banks of the Nile. This leads north to the bridge over the sluice gates on the lbrahimiya Canal. Moreover, it continues to the Asyut Dam with its busy bazaar and lies west of the railroad.

Rock Tombs: The Asyut Rock tombs, from where there are fine views, reached via a steep footpath. The largest tomb is the tomb of Hapidjefa who ruled in the 12th Dynasty.

Coptic Monastery of Dei Rifa: In fact, the monastery located 6 km south of the rock tombs.

Asyut Dam: In fact, the dam located to the north of the town on the west bank of the Nile. The dam built by a British firm to the design of British engineers in 1898-1902. The dam serves to regulate the flow of water in the lbrahimiya Canal. In fact, the canal which starts there and irrigates more than 1,000,000 acres of land. The lands are not only in Asyut but also in Beni Suef and El Minya as well. In fact, the dam is 12.5 m high and 83 3 m long. Moreover, the dam consists of 13 sections. The first located at the west end and has three arches. Moreover, it has a lock to permit the passage of ships, while the others have nine arches each. The sluices are 111 in all and can closed by iron gate.

Coptic Rock Chapel: If you continue up the hill, you will pass a small Coptic rock chapel. There, there is a wide view of the extensive rang of hills. In fact, it is along the eastern edge of the Western Libyan Desert.

Service taxis to Asyut leave Cairo from Midan Giza. In fact, the distnace between Cairo and Asyut is five hours driving.

All trains which run between Cairo and Luxor stop in Asyut. At Ramses and Giza stations you can take an official tourist train. Yet, it is possible to board any other train if you insist.

Getting around in Asyut

Taxis are the commonest means of transport around the city of Asyut.

Asyut can explored on foot. It's also possible to take short trips around town with a horse drawn carriage. 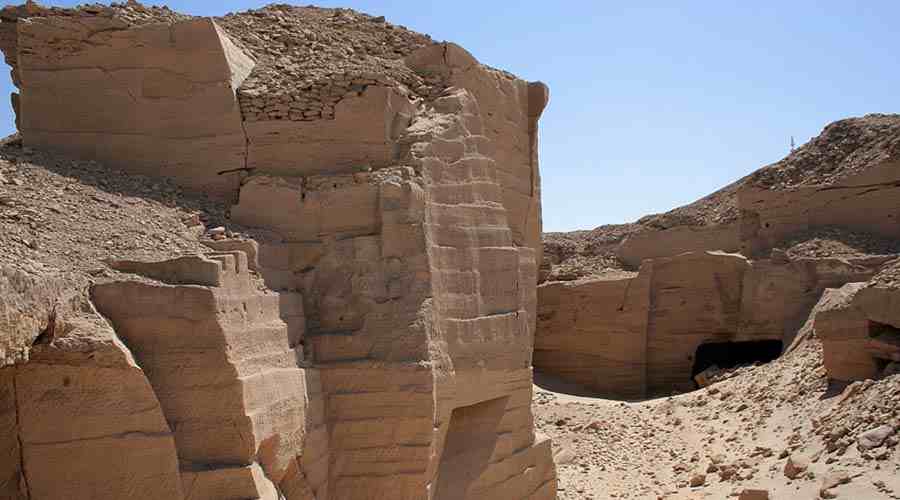 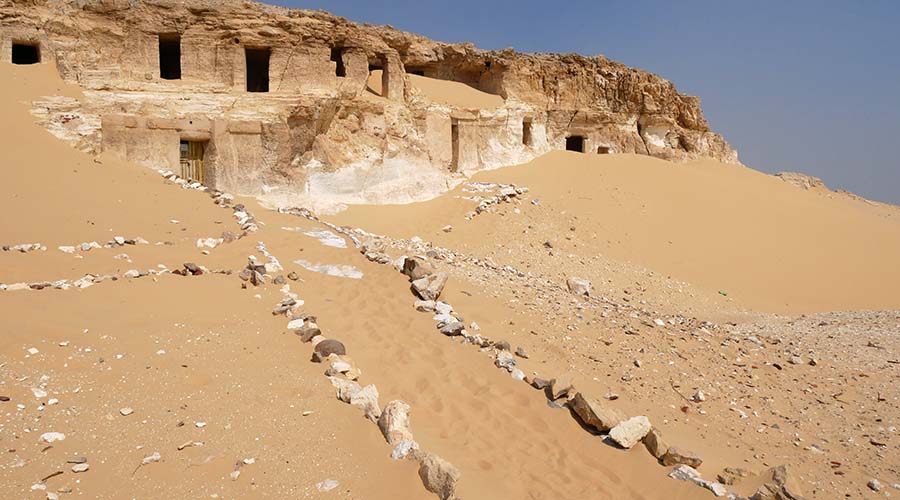 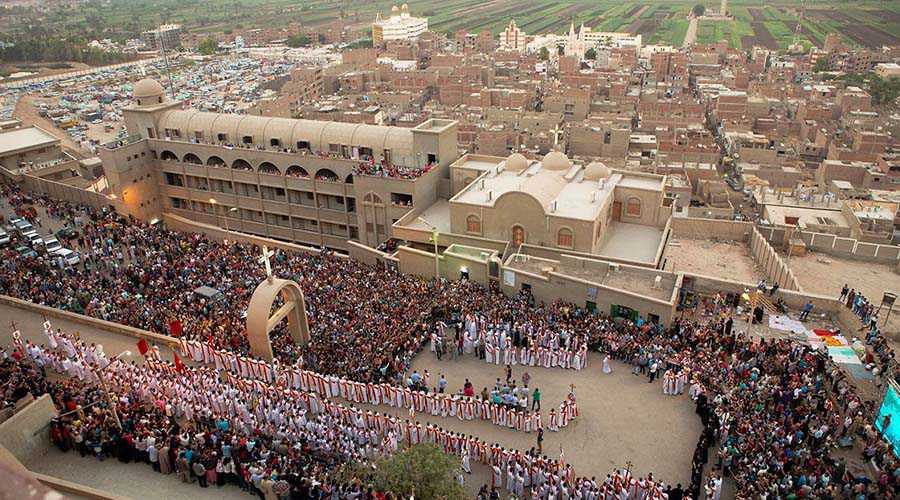