Luxor Activities include Hot Air Balloon ride in the early morning. It indeed is one of the most breathtaking ways to see Luxor. The sunrise view you’ll catch while floating up in the clouds is worth waking up early. Moreover, the way the sun hits the magnificent temples. It lights up the green of the Nile banks is a sight you will never forget. Furthermore, there are many balloon companies you can arrange a trip with. They are subject to rigid security regulations. You can ask us (Egypt Travel Link) or also your hotel for more details. Moreover, it is also possible to organize these trips with the balloon companies. The hot air balloon is an incredible way to see the “world’s largest open air museum”.

Luxor Activities also include Bicycle rent. In fact, it indeed is common in Luxor, Egypt. Luxor is in the Nile basin which surrounds a landscape. In fact, the landscape is flat and this makes it an ideal territory for riding bicycles. Wherever you go in town, you will see men and boys riding bicycles. They ignore traffic laws to get to their destination by the shortest route possible. In fact, it is unusual to see an Egyptian women ride bicycles. It is although they sometimes seen sitting sidesaddle on the back of a motorcycle. When the weathers cool enough, the best way to get around Luxor is by bike. The city is flat and all the interesting sites and landmarks are within a short ride from the center.

Bicycle rent in Luxor is easy on either side of the river. There are Bicycle rent shops which spread about the town. They a labelled in many languages. The charge for renting a bike is somewhere around 10 Egyptian pound for the day. The bikes lock to keep them safe and it is rare to have a bicycle stolen. Motorcycles can also rented but beware as there can be problems with insurance. Most drivers in Luxor not insured at all, the risks are quite high. The charge varies between 30 LE and 50 LE per hour. It depends on the shop you rent from and the type of bike.

In fact, they use video Projectors units with animated header. Moreover, they present (LED) lighting and high quality effects. It is by using the best global technology. The Sound and Light Show at Edfu temple presented in six languages. They are Arabic, English, French, Spanish, Italian and German. All languages are available through headphone with simultaneous translation.

You will listen to sound effects and gaze at the magnificent ruins illuminated. All these during the well presented Sound and Light Show at Karnak temple. Karnak is one of the most important Temples of the city of Luxor. In fact, its construction started in the reign of King Seti I. It completed during the reign of King Ramses II. The temple located three kilometers to the north of Luxor Temple. It built for the worship of the sacred trinity of Tehbes, Amoun-Re, his Wife, Mootand son. Karnak temple is indeed the largest temples of the ancient world. Furthermore, its construction began in the reign of the central state, about 2000 BC. 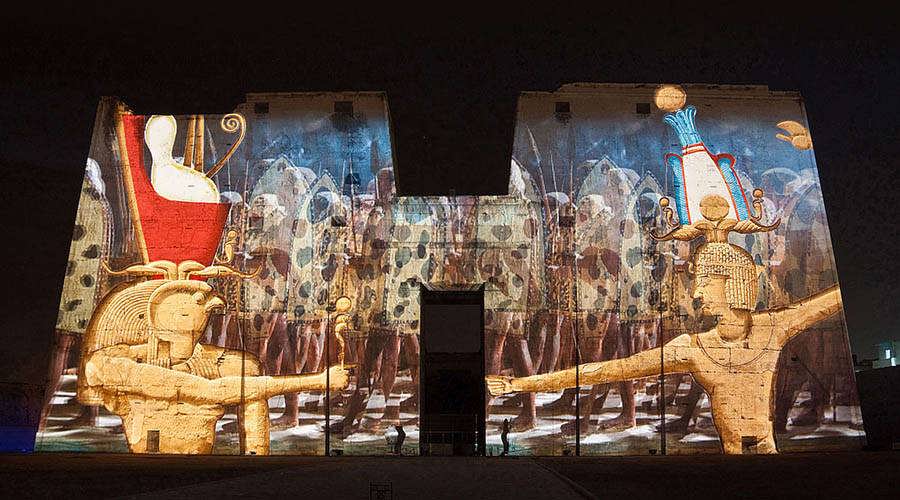