Alexandria Nature Exploration represented by Ashtum El Gamil National Park. It is a protected area in Tennis Island, Manzala Lake. The lake lies on the Mediterranean coast in the north eastern part of the Nile Delta. The National Park belongs to Port Said Governor-ate. The area of Ashtum El Gamil National Park is about 180 km 2. It includes two straits. They link the lake with Mediterranean Sea. Moreover, they renew the water circulation inside the lake. They increase the stock of fish and prevent concentration of heavy elements.

Alexandria Nature Exploration also represented by Burullus Lake. It situated along the Mediterranean coast. Moreover, it also occupies a more or less, central position between the two branches of the Nile. It extends between 31o 22′ – 31 o 26′ N and 30 o 33′ – 31 o 07′ E. Furthermore, it is a shallow brackish lake, connected with the sea by a small outlet (Boughaz). It is about 50m wide near El Burg village. The length of the lake is about 65 km. The width varied between 6 and 16 km, with an average of about 11 km. The depth of the lake ranges between 0.42 and 2.07 m.

Alexandria Nature Exploration also represented by Bird Watching on Burullus Lake. Up to 42 Marsh Harrier recorded on it. Red-throat Pipit, Rock Pipit and Yellow Wagtail also reported. They are abundant in winter. The total number of waterbirds wintering in Burullus Lake and adjacent marshes exceed half a million. Land reclamation along the southern and south-eastern periphery of the lake, is the main threat. The continuous land reclamation projects have an irreversible impact on the ecosystem of the lake. This is because of its great international importance as a wintering area for the Pale-arctic waterbirds.

Alexandria Nature Exploration also represented by Nelson’s Island. It lies approximately 20 kilometers east of the Egyptian port of Alexandria. In fact, Nelson’s Island is four kilometers north of Cape Abu Qir. It and guards the northern approach of Abu Qir Bay, which is the western part of the Nile Delta. In fact, Abu Qir Bay provided one of the primary commercial routes leading into the Nile River. Moreover, it became a major commercial and religious center. The position of Nelson’s Island ensured that it too became an important site.

Dr. Gallo’s excavations that commenced in 1997 are beginning to reveal its archaeological riches. In fact, Nelson’s Island is quite small extending around 350 meters on a rough north-south axis. Nelson’s Island is about 125 meters at its widest point (the southern end). But as Dr. Gallo points out ‘it is small for an island but big for an archaeological site!’. The island littered with potsherds and the faint outline of walls and structures. 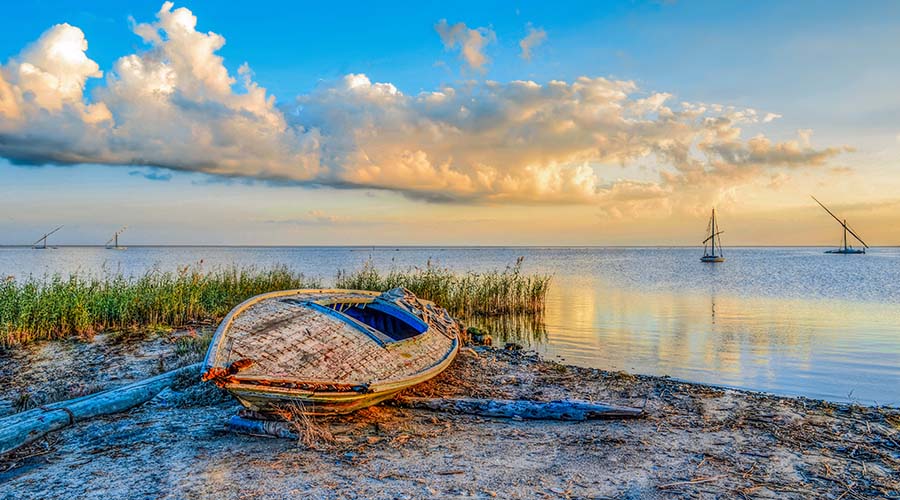