Copts who form the majority of Egyptian Christians are followers of the Coptic Orthodox Church and considered to be part of the descendants of Ancient Egyptians and one of the first peoples to convert to Christianity. In fact, the word “Copt” derives from the Arabic word “Qibt” – or “Gibt” – which derives from the Greek word “Egyptos” meaning “Egypt.” The Ancient Egyptian root of the word was “Hikaptah” (Ha-Ka-Ptah), the name Memphis was known by in 3100 BC at the time when it was the first capital of Ancient Egypt. The Coptic Church traces its spiritual history back to St. Mark, the traditional author of the Gospel of Mark, and considers him to be the founding father of the Coptic Orthodox Church.

The history of the Coptic Church is tied to the history of Christian monasticism. The ancient tradition of monasticism continues to be practiced in Egypt and offers a great opportunity to visit Coptic monasteries, such as the monastery of St. Simeon in Aswan , St. Anthony and St. Paul Monasteries in the Red Sea mountains, and Deir Al-Kashef (Al-Kashef Monastery), an early Coptic monastery in the Western Desert . Some of Egypt’s churches also rank among the oldest Christian landmarks in the world, such as the church of the virgin in Asyut and the Coptic Cathedral of St. Mark in Alexandria . Several churches and monasteries also mark the Holy Family Journey trail as described in the Bible. Take an angle’s advice and “Arise, and take the young child and his mother, and flee into Egypt.”

See the distinctive blend of cultures at the Coptic Museum in Cairo where are displayed hundreds of Christian Egyptian documents, statues and artefacts in which you’ll distinct Ancient Egyptian, Greek, Roman, Byzantine and Ottoman influence. Take a breath of fresh air in a peaceful courtyard surrounded by green gardens when you need to relax. The Coptic Museum is located within the Roman fortress town called Babylon Fortress in Old Cairo, step into the past and walk by the fusion of cultures inside and outside the museum in a place as old as history.

Take the steps that lead to one of the most beautiful churches in the Middle East known as the Hanging Church. Built on top of the Babylon Fortress, the nave of the Hanging Church is suspended over the passageway.
Located just south of the Coptic Museum in Cairo, the Hanging Church boasts 13 magnificent pillars in its interior, representing Jesus and his 12 apostles. Listen in on the ancient liturgical Coptic language used in service and witness a living vestige of Ancient Egyptian history.

A small and historically significant church near Abu Serga Church, the Church of St. Barbara, or “Sitt Barbara” houses some interesting icons and the relics of the Saint herself, who was murdered by her father after attempting to convert him to Christianity. Many of the treasures of this ancient church can now be found in the Coptic museum which is a two minute walk away. Built between the 4th and 5th centuries this church retains a beautiful ambience owing to the artful icons and its breathtaking Coptic architecture.

The unique Church of St. George is the only round church found in Egypt. Built in the 10th century on top of a Roman tower of the fortified town called Babylon, the church is connected to the Monastery of St. George and is the seat of the Greek Patriarchate of Alexandria. Ascend the steps along the Roman towers and see a relief of St. George slaying a dragon on the outer brickwork of the wall. Inside, the austere ancient artwork grace the church with depictions of St. George and his quest to defend Christianity.

Starting April 2, 1968, mysterious apparitions of light, above the dome of St. Mary Coptic Orthodox Church, Zeitun, Cairo, has changed the lives of thousands. Her appearances at Zeitun (Olives) were astounding. She was seen by more than a million people, Moslems, Protestant and Coptic Catholics, and Orthodox. The apparitions were broadcast by Egyptian Media and announced in Al Ahram, the most prominent Arabic daily newspaper, and oldest in the middle east. Photographed by professional photographers, including the curator of the Egyptian Museum, a confessing Moslem himself. The apparitions lasted for three years with unaccountable healings, numerous of them are attested by various specialist medical consultants.

The efficient Cairo police, who initially suspected the apparitions were an elaborate hoax, searched the vast surrounding of the site to uncover any device that could be used to project such images, without avail. After being personally witnessed by Egyptian intelligence officials, President Abdul Nasser, an avowed Arab Socialist, attended a whole night’s observance. The Papal Vicar and few Vatican Curia, investigated and witnessed the most glorious like-event, to be attested by all sorts of believers from every faith. While the appearances at Zietun were silent, the silence spoke volumes to those who came to see and strengthen their faith. Abba Kyrillos, the saintly Coptic Patriarch (1959-71) publicly announced months after the apparitions have started that he had no doubt that the blessed Mother of God was appearing above the dome of St. Mary’s Coptic Church, on Toman Bay Street.

For those suspecting Thomas likes, who needed to see for themselves, Mary offered an unequivocal televised demonstration at Zeitun. Yet, very few outside of Egypt learned of her astonishing appearances there until well after they have ended. At the time of Jesus’ birth, King Herod heard of the birth of a baby king and fearing for his throne, ordered all infant boys in Bethlehem and its vicinity to be put to death. Mary and Joseph escaped with the child, seeking refuge in Egypt. There they were said to have found shelter beneath the shade of a sycamore tree. The trunk of the tree is also said to have opened its bark miraculously to protect them when brigands pursued them. A miraculous spring of water gushed nearby for the child to drink and in its pool, a healing Balsam plant grows until this day.

Great numbers of pilgrims have been visiting Virgin Mary’s Tree in the Matariya suburb of Cairo, since the 4th century, in the hope of a sighting of the Virgin Mary and to collect the tree’s bark, said to have medicinal properties. The Balsam plant is also used for the preparation of perfumes and Chrisma, a holy oil that has been consecrated since apostolic times. 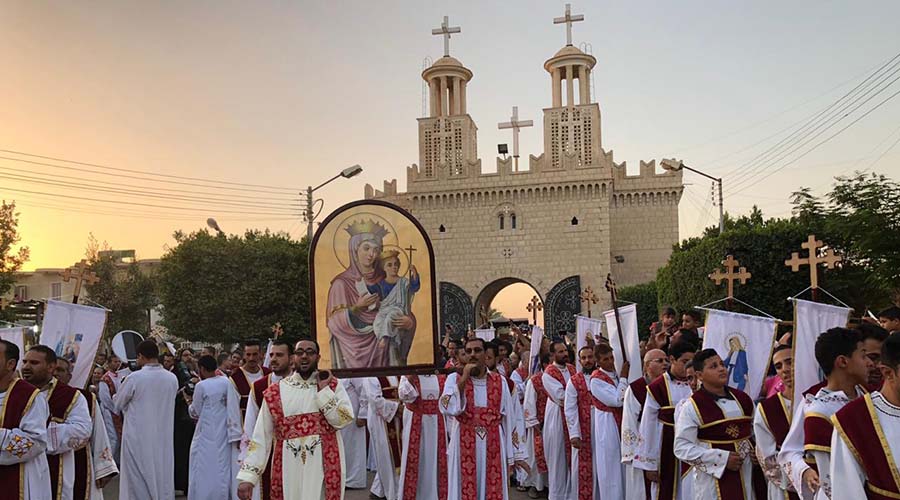