Egypt Parks and Gardens include two major parks. Walking down the Alexandrian world famous waterfront corniche you can’t miss the eye-catching beauty of the fantastic beaches and park of Montaza Gardens. Take a walk through the green and flourishing alleys of the park and have a look at the old Salamlek hotel in all its splendour. The El Salamlek Palace was actually built in 1892 for H.H. Khedive Abbas Helmi II as the Khedive’s hunting lodge. It is located on a hill overlooking the Mediterranean, thus offering spectacular views of the coast. In fact, Montaza Palace is a palace and extensive gardens in the Montaza Complex Alexandria. Moreover, Montaza Palace built on a low plateau east of central Alexandria overlooking a beach on the Mediterranean Sea.

The extensive Montaza Palace grounds first had the Salamlek Palace. Salamlek Palace built in 1892 by Khedive Abbas II, the last Muhammad Ali Dynasty. Further more, Montaza Palace used as a hunting lodge and house for his companion. In the year 1892, Abbas Helmy II, the last Khedive of Egypt and Sudan, used to like riding horses and donkeys on the shores. He was doing that in the neighborhoods of Alexandria with some of his friends like Ahmed Shafiq Pasha. They used to start their rides from Sidi Bishr, a neighborhood in the west of the city of Alexandria. And then they move to different places of the jewel of the Mediterranean Sea. In one summer night, Helmy ordered his men to prepare 80 donkeys for his ride in Alexandria. This is besides the Khedive Music band which consisted of 48 music players and their instruments.

Escape Cairo’s exhilaration by heading to the green landscaped gardens of Al Azhar Park where you’ll relax in a tranquil setting while gazing at beautiful panoramic views of the capital. Embracing valuable history, the park is also home to the newly discovered Ayyubid wall, constructed by Salah El Din more than 800 years ago. You can also choose to sit back at one of the numerous and unique cafes and restaurants, all offering 5 star services. They have been built and thoughtfully positioned for visitors to appreciate the beautiful surroundings.

The park offers a spectacular 360 panorama over the town escape of historic Cairo. In fact, before work started, Al Darrassa was a municipal rubbish dump. Moreover, the builders had to clear a 500 year-old accumulation of fill and debris. More than 80 000 truckloads of material which built up here over the centuries. The 12th century Ayyubid wall buried up to its battlements. In fact, it was necessary to excavate to a depth of 15 meters to extract it. The section of the historic wall, several towers and battlements appeared in good shape. The wall, gates and towers link Al Azhar Park Cairo with the adjacent district. Moreover, the interior chambers and galleries also do. This led Aga Khan to launch a combined physical of Darb Al Ahmar district. The park construction could act as stimuli for the rehabilitation of Darb al Ahmar. 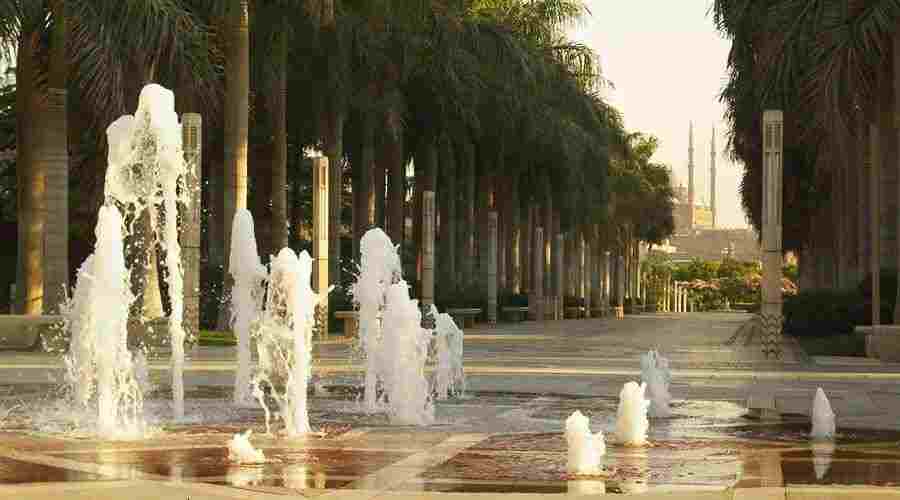